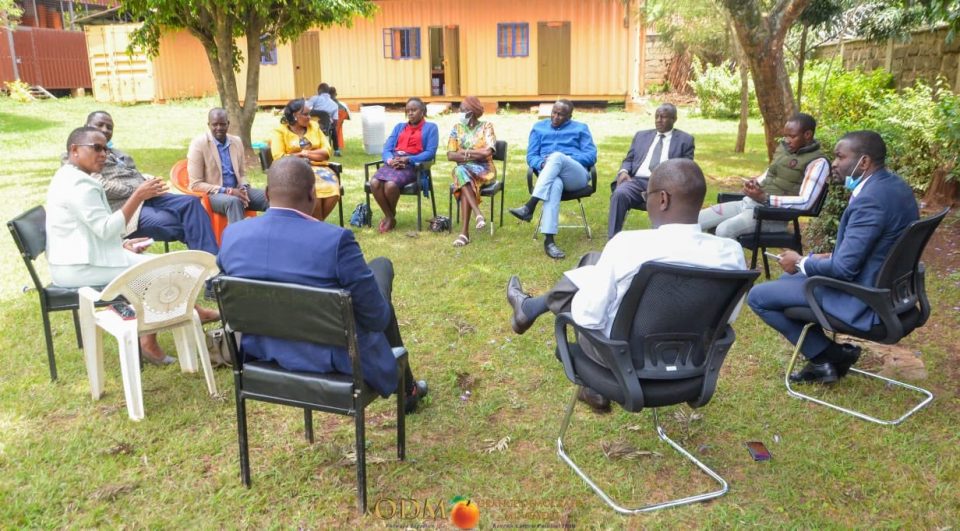 Realigning the party’s leadership, was yesterday at the top of the agenda, when Kajiado’s Orange Democratic Movement lawmakers met the top party officials at the Chungwa House in Nairobi, it has emerged.

Taking to her social media platform, Ms Pareno, an ex-chair of the party’s National Election Board, wrote in part: “We deliberated on how to strengthen the party and ensure full support to the (Building Bridges Initiative) BBI process.”

In his part, vocal Kitengela Ward representative Paul Matuyia, speaking to Kajiado Star in an exclusive interview, said, it was resolved that the party will conduct an harmonization exercise to fill all vacant positions, whose previous holders had defected to other political parties.

Mr Matuyia, in an apparent concurrence with Pareno’s remarks, said the exercise is aimed at rebranding the party and giving it fresh impetus, as it gears up for an anticipated referendum, and also the coming general election.

He alluded that it is to be expected before the end of the year.

“Of particular interest is the party chair position that felt vacant [in September 2017] following the defection of former chairman Daniel Osoi, [who defected to Jubilee Party], and which has been held, since then, by Innocent Katoo in an interim capacity,” said the lawmaker, adding that, given the stature of the ODM party in the country’s political landscape, it is imperative that it has a substantive chairperson.

Matapato North MCA Dickson Nkaloyo, also on his part, told this publication, that the issue of leadership alignment, “was intensively” discussed, as one of the foremost undertakings the party is aiming to execute soon, in consideration of anticipated key events in the country — referendum and general election.

This publication has however learnt that a majority of the party adherents are keen to have the county party chair replaced, for alleged failure to ensure a seamless information flow between the party’s top office and the local stakeholders.

Further, he is accused of making precipitous remarks, on social media, which though could be personal, are seen to taint the image of the party.

However, Katoo in a quick rejoinder, and apparently aware of the hatched plot to replace him, dismissed the “interim chair” moniker, terming it an orchestration by Governor Joseph ole Lenku’s political sympathisers that the latter is using to hit back on him, for his sustained criticism of the governor.

He claimed that he has been a substantive chairperson, and that in the case of the said harmonisation taking place, his post will not be affected, banking his assertion on a statement released by the party yesterday, which recognised him as the chairman.

“Kajiado is strong: The Kajiado County party leadership led by Chairman Innocent Katoo and nominated Senetor Judith Pareno were at Chungwa House to give a strong statement of how strong the party is in the county and their plans to make it more vibrant,” reads a statement by the party in part.

“My differences with Lenku are personal, and nobody should imagine of victimising me on account of my opinion, it is my democratic right,” Katoo further charged.

The lawmakers however unanimously rubbished what they termed as attempts to drag the governor, “into his own woos” as baseless allegations.

“I am personally tired of such kind of leadership,” said Matuyia, “whereby a leader just does things without doing consultation, and goes giving his opinion, and not minding, that he is the face of the party at the county.”

“The party supporters have over time expressed disdain over silly (sic) remarks that Katoo has been making on social media, and we wish to show them that we pay particular attention to their expressed concerns,” Nkaloyo chimed in.

Other leaders who had announced their defection are; Senatorial aspirant Daniel Tenaai, Kajiado East MP aspirant Kakuta Maimai and former Women Rep hopeful Esther Somoire, who is currently the County Executive for Health.