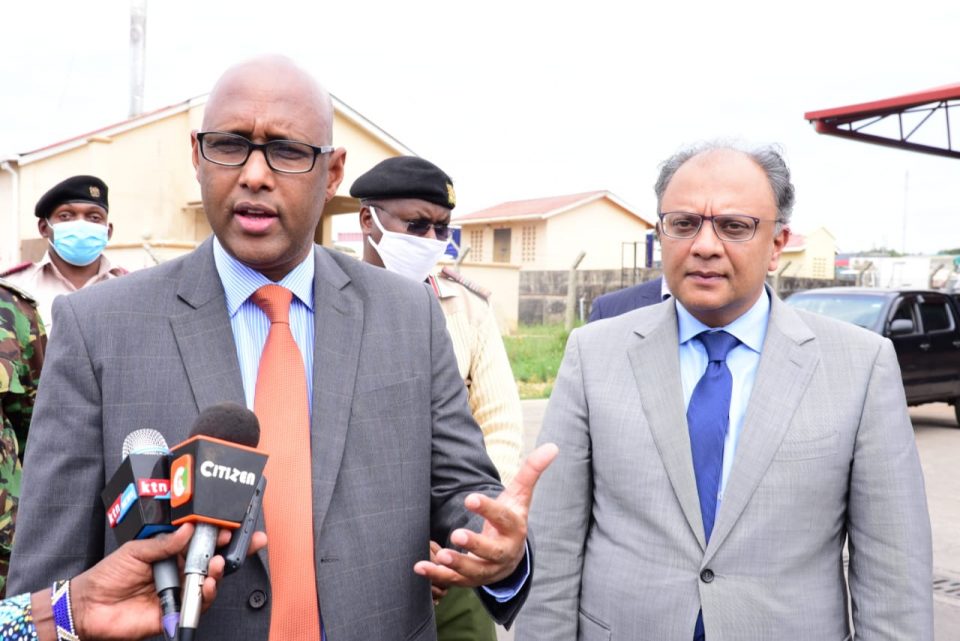 Kenya and Tanzania have agreed to reopen the Namanga border for the transportation of cargo after both countries harmonized Covid-19 testing procedures at the point of departure and entry into either of the Country.

The agreement deal was arrived at after a two week long impasse where the Tanzanian officials closed their gates disputing Covid-19 testing results as well as delays at the Namanga One Stop Border Post (OSBP).

East Africa Community and Regional Development Cabinet Secretary, Ahmed Adan speaking to the press at the Namanga OSBP yesterday after striking the deal with his Tanzanian counterparts assured the truckers that the government is committed to ensuring flow of business between the two countries.

“Indeed, we have had a few challenges in the last two weeks with delays of the Covid-19 results for the truckers due to the challenges of reagents to conduct the tests due to the high demand of the reagents across the World,” said the CS.

However, he affirmed that the Ministry of Health officials had confirmed availability of the reagents and the Namanga hospital isolation facility will now be fully equipped to ensure that from sample retrieval, testing and the release of the results will be undertaken from the facility unlike the norm of taking the samples to Nairobi.

The Cabinet Secretary reiterated that the border will still remain closed for travellers since all EAC countries have agreed to restrict movements of persons to ensure that the efforts of flattening the curve are implemented to the latter to curb infection rates.

“Restriction of movement in and out of the Country is still on since it is very expensive to conduct Covid-19 tests to all travellers and only long-distance drivers who are transporting cargo will be allowed,” said Aden.

He urged the EAC Partner States to ensure that World Health Organization (WHO) guidelines are followed to the later since this can strengthen or weaken the fight against Covid-19 pandemic until a time when all agree to reopen and the curve has flattened.

Truckers have welcomed the move and appealed to the government to prioritize testing and the relay of the results as soon as possible to avert losses and time wasting.

A trucker John Kamau said, “It has been 15 days of stress being stranded here at the Namanga OSBP since the embargo began”.

“My Covid-19 certificate has already expired and I am yet to transport my goods to Tanzania, which I will have to undergo another test again to be able to get access to Tanzania,” said the distressed trucker. “We have depleted our monies with double testing and the upkeep expenses here,” he added.

Namanga One Stop Border Post is among the key entry points to Kenya where at least 2000 trucks pass through daily however due to the pandemic the number has decreased up to 100 trucks.

Since the embargo was imposed two weeks ago, traffic at the OSBP has gone up and the EAC Cabinet Secretary said normal operation is expected to flow by Friday.

When OSBP was reopened yesterday 260 trucks were cleared getting into Kenya due to the interventions undertaken to reduce Covid-19 results awaiting time up to a maximum of 24 hours a day rather than the usual 48 hours.

The CS also noted that a Mobile Covid-19 laboratory has been installed at the Naivasha Inland Dry Port in addition to that of Namanga OSBP to fast track testing and relay the results to truck drivers.

The Namanga Covid-19 laboratory has a capacity of processing 90 test results.

‘We are starving’: Private schools teachers call for gov’t intervention