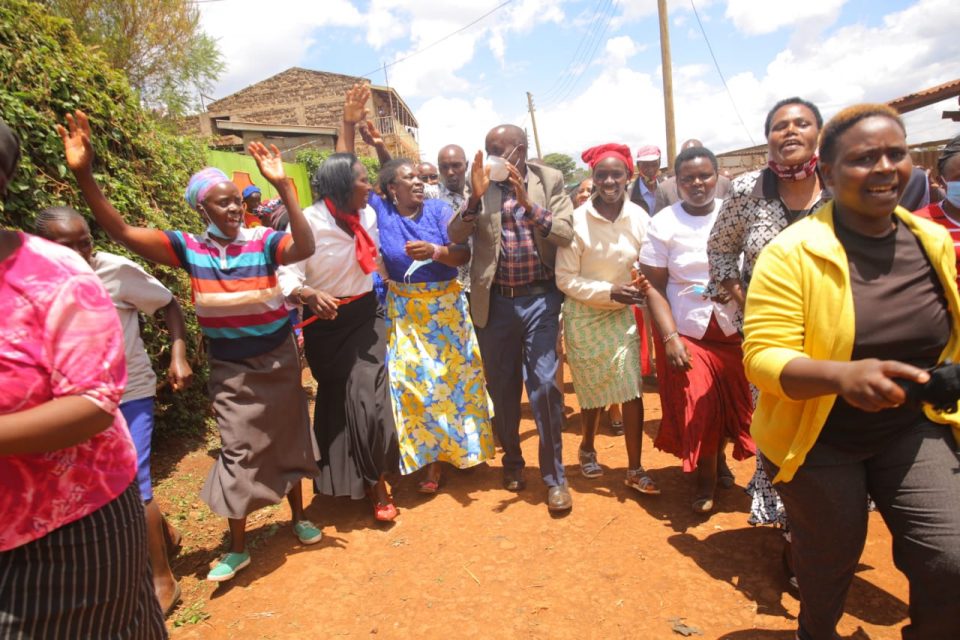 The residents say they have experienced inclusion in their appointment to local government’s job opportunities, and a record projects development

Thousands of residents of Kajiado North, in the presence of the area MP Joseph Manje have assured Governor Joseph ole Lenku of their unequivocal support in his re-election bid.

In an ecstatic whirlwind tour of the populous Gichagi and Mathare slums in Ngong Ward and estates in Nkaimurunya Ward, the jubilant residents said they will also support President Kenyatta and the Building Bridges Initiative (BBI) process under the leadership of the governor.

The residents cited inclusion in the local government’s job appointments, and record development projects as top of the hallmarks that have impressively marked Lenku’s three years in office, and consequently, the reason for their vowed support.

The governor started his tour in Gichagi where he commissioned new cabro works that have opened-up the fast-growing Ngong town and the slum; before he went to distributing relief food to hundreds of residents during a public meeting.

He then toured Mathare slums where the MCAs drummed up support for the Governor and BBI before distributing food to more than 500 families in the sprawling slum next to Ngong dumpsite.

In Mathare, the governor officialy opened the County Government’s community’s social hall and fully equipped it with seats and a powerful Public Address System and a community tent.

After the slums’ tour the Governor’s entourage snaked its way into Nkaimurunya Ward where he first opened a female and pediatric ward before addressing hundrends of residents at a public meeting in the area.

The Governor’s tour comes hot on the heels of the release of the BBI report woth the Governor saying in a few days, he will lead like-minded leaders in the County to drum up support for the BBI report.

These are grasshoppers, not locusts: Lenku

A medic, 57, dies after throwing herself in front of speeding lorry