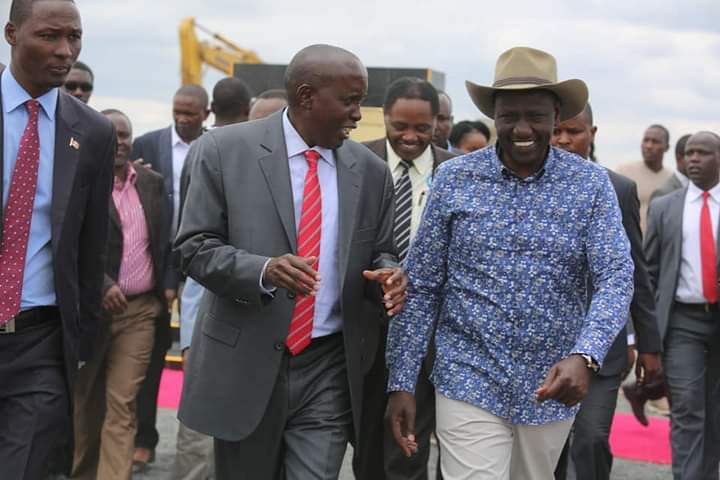 Could it be DP Ruto’s hidden message, to Ole Lenku, that Katoo does not feature prominently in his plans and that the door is wide open for Lenku – the ‘prodigal son’ – to become Ruto’s kingpin in Kajiado County

It was not lost on political observers that Rift Valley political leaders met in Kajiado to map out their future inside a possible William Ruto government, without their hosts being present.

Well, their choice of venue was an intriguing one, seeing as Joseph ole Lenku, the governor of Kajiado, the senior most politician in the county, who would have hosted and welcomed them, was nowhere to be seen.

Shouldn’t they have chosen to hold their meeting in a county whose governor is at least sympathetic to their cause?

Kenyan politicians are notoriously hostile to politicians from other jurisdictions ‘visiting’ their turfs in their absence or arriving without having given prior warning of the ‘visit’. They see it as an act of contempt or worse still, sabotage.

So did the Rift Valley politicians, who met at the Maasai Lodge in Rongai, consult Governor Lenku on their visist in his county? If not, what message if any, were they passing to Ole Lenku by congregating in Kajiado without his knowledge?

Could it be that they were telling him that ‘you are one of us but you refuse to identify with us; that you would be isolated when our man forms the next government’. Does Ole Lenku have any reason to get anxious?

Well, one thing that came out abundantly clear is that Ole Lenku is not in DP William Ruto’s camp and does not wish to be identified with the camp, or does he? Governor Lenku has in a previous occasion come out openly to show that he is in the camp that includes Wiper leader Kalonzo Musyoka, Musalia Mudavadi of ANC and Moses Wetangula of Ford-Kenya.

DP Ruto and his Tanga Tanga brigade have no time for BBI.

Before the Handshake came into being Governor Lenku was largely seen as a Ruto man. However, when it appeared like the BBI wave was sweeping across the country, and every politician was angling to be identified with it, Ole Lenku made what was seen to be a radical move by loudly proclaiming that he was BBI damu.

He was even made the BBI coordinator in the Maa regions of Kajiado, Narok and Samburu.

It is around that time that Kajiado South MP Katoo ole Metito announced that he would be challenging Ole Lenku for the governor’s seat come 2022.

Soon, Katoo, who identified himself with the Ruto camp started creating waves in the county, winning himself new converts particularly MCAs who were previously seen to be supporters of Ole Lenku.

It has been said that it was never Katoo’s wish to immerse himself in the rough and tumble of gubernatorial politics; that he was just content with representing the people of Kajiado South in Parliament.

In fact, word has it that after Lenku exited the government, where he was Interior cabinet secretary, he had set his eyes on the Kajiado South Parliamentary seat.

Not keen on having Lenku as his challenger, it is reported that Katoo was the one that prodded Lenku into going for the governor’s seat, confident in the knowledge that he would be whitewashed by the then governor David Nkedianye.

With that in mind, it is rather obvious that DP does not consider his political catch in Kajiado (Katoo) weighty enough.

A governor, in the form of Ole Lenku, would be more prestigious for the Deputy President and not a mere MP. The other Ruto loyalists in Kajiado are nominated senator, Mary Seneta, who apparently was in the Rongai meeting, and senator Philip Mpayeei, both of who do not cut a lot of weight in the county.

The unspoken reality of the Lenku-Katoo rivalry is that DP Ruto would scoop up Governor Lenku in a flash, were he to indicate willingness to work with him. Ruto would then get Katoo off Lenku’s neck and Katoo would retreat back to his Kajiado South comfort zone.

That would be ideal win-win situation for all involved.

Back to the Rongai meeting: It was also not lost on many Kajiado observers that Katoo was conspicuously absent in that meeting. Could it be DP Ruto’s hidden message, to Ole Lenku, that Katoo does not feature prominently in his plans and that the door is wide open for Lenku – the ‘prodigal son’ – to become Ruto’s kingpin in Kajiado County.

Only time will tell.

Internet lights up after pictures of Sekento with president appear online