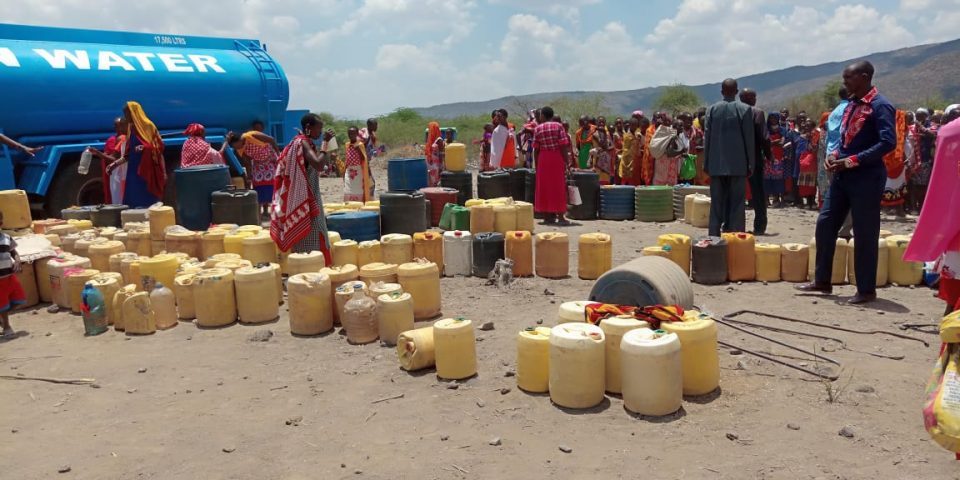 Not only does this Maa cleric offer spiritual nourishment to his flock, he is the single largest water provider in Magadi Ward

Tired, hungry and confused, the young man prayed that daybreak would arrive sooner. Huddled under a tree with only a threadbare shuka covering his skinny frame, Moses Turere could only think about the warm fire in his mother’s kitchen, and the thought warmed his heart.

Then the skies opened, and heavy rainfall hit the earth. The tree proved useless under the rain.

As the night wore on, his body somewhat got used to the cold and out of exhaustion, he drifted off to sleep and was soon in dreamland. In his dream, Turere saw himself addressing a huge gathering, people of different nationalities, in a language other than his native Maa. What was more, he was dressed in a suit.

He was shaken off his dream by the cackle of a hyena. Suddenly awake, he realised that hyenas were not far from where he was. He could hear their powerful jaws crunching bones as they feasted on what was most likely a carcass.

Two thoughts crossed his mind: One was to go share the meat with the hyenas, the other to run for safety. Sanity prevailed and he climbed up the tree to wait for dawn.

His thirst for Christianity saw him at constant loggerheads with his father, who would not countenance his children worshipping a foreign God. His father came from a lineage of Maasai Oloibons and wanted his son to follow along that line. The night he spent in the bush was one among the many his father had banished him.

“When my father realised that missionaries were out to convert us into Christianity, he chased them away from our compound,” recalls Turere, who today runs the Global Cathedral Ministries, the first Maa church in the heart of Nairobi. “To avoid being on his wrong side, when out there grazing we would take turns to sneak to church and dash back without him noticing.”

Bishop Turere, who has travelled the world preaching to people of various nationalities, believes that his ministry is the culmination of the vision that came to him that night he slept hungry in the bush. Global Cathedral Ministries, he says, is an urban church. “We take care of the spiritual needs of urban Christians, being sensitive to their sophisticated intellectual levels,” he explains.

“It is sad to witness the kind of drama some preachers subject their congregants to in the name of miracles; we are more sophisticated than that,” he says. “I have a 10-year plan — that of planting a church in 10 different African cities — one church every year.”

His journey has been long and tortuous. From the moment he embraced Christianity at a young age, Turere knew he would henceforth be on his own. “My father’s oloibon ego had been punctured; he even uttered a curse to the effect that no one known to him should associate themselves with me,” he recalls.

Still, there was the small matter of the dream where he saw himself addressing people of many nationalities in a foreign language. He needed to learn the language of the missionaries, fast. To overcome this handicap, Turere convinced a school-going relative to teach him how to read and write. Such was his passion for education that in a period of three months he was able to read the New Testament in Maasai language!

“I perfected my spoken English through the lessons I got from Bob Calvert, a missionary who had been posted to our village and who saw the potential in me,” he says. His thirst for more spiritual education took him to the Kenya Baptist Theological College in Tigoni, where he sought admission in 1998 but was rejected as he had no papers.

Not to be deterred, Turere went back with five elders in tow as well as the local missionary, to act as his character witnesses. “After the elders pleaded my case, the college agreed to admit me but would first put me on a six months’ probation,” he explains. “At the end of the three-year training period, I had exceeded their expectations; I had scored A’s in most subjects.”

Come graduation day, Turere was chosen to speak on behalf of the students. This was no mean achievement, seeing as retired President Daniel arap Moi was the chief guest. With his strong performance, Turere got a scholarship to join Daystar University for a course on marriage and leadership. Incidentally, it was at Daystar that he met Lucy Turere who later became his wife.

In 2005, Turere attended a conference at St Andrew’s Church in Nairobi where one of the speakers, an American, invited him to the US. “When being interviewed for a visa at the embassy, I was asked to provide my bank details. I did not have one,” he recounts. “I told them that I had 50 cows and 100 goats in my village in Tinga.”

Seeing the incredulous look on the embassy official’s face, Turere, with a straight face, offered to take him to his village to see the animals for himself. “After a brief pose, the man stamped my passport and wished me a safe journey, and that is how I made my first overseas trip,” he recalls with a wry smile.

Alongside his preaching ministry, Turere says that he has a passion for providing water to the people. So far, he has invested around Ksh170 million to build a pipeline that provides water to the people of the larger Magadi Ward, which includes schools, dispensaries and homesteads. “We provide the GSU training camp with 2 million litres of water every month,” he explains. “We also provide Tata Chemicals with 200,000 litres of water per day.”

The passion for water provision, he says, was inspired by a painful personal experience he had when growing up. “Our land had gone for many months without rain; the drought was quite severe,” he recalls. “Even underground wells had dried up.”

At some point, Turere got so thirsty that his body was dehydrated. “I was left with no option but to drink cow urine to survive,” he says solemnly. “At that moment I made a pact with God that if I ever came out alive, I would do my best to connect our people with water.”

That is how, much later, in his preaching ministry, he found himself working as project coordinator for Baptist Foreign Mission.

He recalls how the Baptist missionaries installed a windmill pump at the cost of Sh6 million in Kisamis but which was later dismantled by angry residents. “The windmill, used to pump water for area residents, broke down and required routine maintenance but when the people approached the missionaries they were told that money for maintenance had not been factored in when the project was being conceptualised,” explains Turere.

In anger, the villagers brought it down, seeing that it was of no use to them.

The fate of that windmill pump served as a lesson for Turere, who saw the folly of establishing projects without a sustainability plan. “I decided that henceforth, I would involve them in the day-to-day activities of running the project,” he explains, adding that they agreed on a small fee that would be paid by every homestead benefitting from the water.

This is the kitty, collected from the villagers, that is used for maintenance purposes in case of breakdowns. “When the people own a project, they will take care of it, as opposed to projects that are started without the people’s involvement,” adds Turere.

The Nairobi Global Cathedral is located in Langata, inside Amref University’s auditorium. “At Global Cathedral, we seek to lead by inspiring our members and engaging them at the level of their reasoning,” he says of the church’s ideology.

“Attracting almost 300 members of the church within six months of opening is a sign that people need this type of preaching, I teach people the word of God in a language and setup that matches their professionalism,” he adds.

So, how does he relate with his father? “Today we are the best of friends,” he says with a warm smile. “He consults me in every project he seeks to undertake.”

And yes, he lifted the curse he had placed on him.

Why does everybody say they are Maasai?

A medic, 57, dies after throwing herself in front of speeding lorry