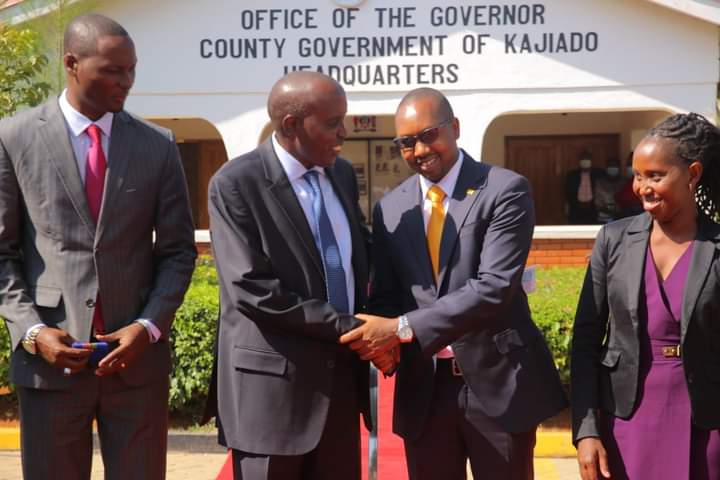 Augustine Sekeyian has been officially sworn into office as the the New County Attorney in a brief ceremony held at the County Headquarters.

Sekeyian, 36, an advocate of the High Court of Kenya, and who hails from the Dalalekutuk community, comes in with a rich experience, having previously served as a legal adviser at the Ministry of Devolution and ASALs, and was also the Tana River County Attorney.

His nomination was unanimously approved by The County Assembly Committee on Appointments chaired by the Speaker Johnson Osoi earlier this month following a motion by the Leader of Majority Julius Moipaai.

Governor Joseph ole Lenku has welcomed the new Attorney and exuded confidence that he is able to fast track pending County Legislation in an Office that had been dormant due to undefined roles and legal systems.

He said Senkeyian had the capacity to align all the processes necessary to enhance performance and service delivery to the people in line with his administration’s agenda.

The Deputy Governor Martin Moshisho lauded the County Assembly for continuous support through an agreeable vetting process that has ensured a smooth transition of functions to the incoming officer.

Speaker Osoi on his part said he was confident that with all necessary legal systems now in place, the office of the County Attorney will be able to advise on key County Legislation currently under the County Assembly’s consideration.

He assured the governor of steady support of his Members in worthwhile development focused engagements for the benefit of the people of Kajiado.

Sekeyian takes over from his predecessor, Maurice Kaikai who passed away in August.

Present during the function were County Executive Members, Members of County Assembly, members of the clergy and a section of the public members.

Nkedianye to Lenku: ‘You have no excuse’