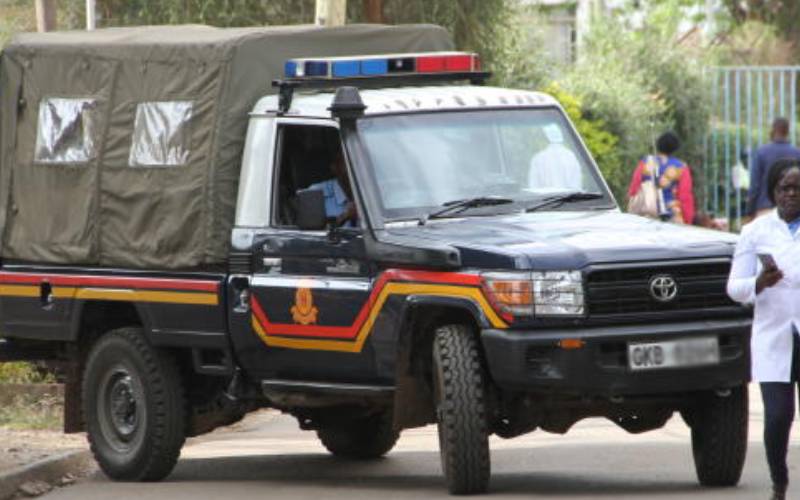 After the act, the canter (license plate withheld), which was transporting milk fled the scene. However, police, through CCTV technology were able to apprehend the canter and it was taken to Ngong Police Station

A traffic policeman in Ngong is recovering at a Nairobi Hospital, after he was thrown off a moving canter, Friday Last week.

According to Kajiado North OCPD, Patrick Manyasi, the officer stationed at the traffic stop on the way to Ngong from Nairobi, arrested the canter for a traffic infraction and was taking the crew to Ngong Police Station. “However, upon reaching the new Ngong Market, the driver swerved and started driving towards Ololua,” said Manyasi. “The crew threw him off the vehicle, about two kilometers on the Ololua road.”

The officer landed on his head, suffering serious injuries. He was rescued by bodaboda operators in the area, who rushed him to King David Dispensary, in Ngong, for first aid, before he was taken to Nairobi West Hospital in Nairobi for specialised treatment as he had internal bleeding.

At the Nairobi West Hospital, the injured officer was taken to ICU for two days before being transferred to HDU. “Doctors attending to him had suggested that he undergoes head surgery, as he was still bleeding from the nose,” explained Manyasi. “However, a neurosurgeon recommended some medication, for five days, to help clear the clot in the brain. It the clot clears, he will be on the path to recovery, if it doesn’t, he will have to undergo the surgery.”

After the act, the canter (licence plate withheld), which was transporting milk fled the scene. However, police, through CCTV technology were able to apprehend the canter and it was taken to Ngong Police Station. The driver was arrested but the turn boy disappeared. The driver was arraigned at the Ngong Law Courts on Tuesday, where he was charged with attempted murder.

Lenku bans hawking in Ngong as he opens new market

Lenku has failed the people of Kajiado, says Tobiko

The history of land injustices in Maa community — Tinaai