A pre-school girl lost her life in a church compound, in Kitengela, after she was allegedly run over by a church official.

The accident happened on Wednesday afternoon at the PCEA Kitengela Township Primary School, which is within the church compound.

A source familiar with happened told Kajiado Star that the elder, who owns commercial property in Kitengela, had gone to the church for prayers. “Upon coming out he asked a friend to check at the back while he reversed, to avoid hitting the children, who had just finished their classes for the day, which the friend did,” said the source. 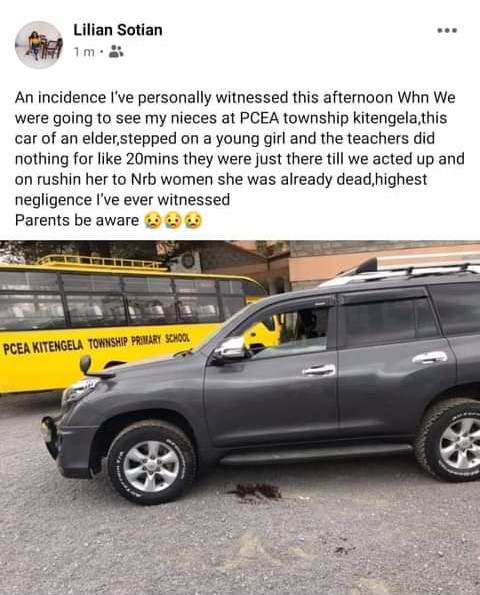 It was while driving forward that he crushed the child. “In the split second between reversing and moving forward, the girl happened to be rushing towards the school driver, who happens to be her uncle, that the elder’s Prado hit her,” added the source.

According to the source, the accident left the old man quite shaken. “He is now admitted in hospital for shock,” said the source.

A parent at the school told us that the incident left pupils at the school deeply traumatised adding that some of them were unable to sleep at night.

The girl’s body was taken to Shalom Community Hospital Mortuary, in Athi River.

The school, through its secretary, later released a statement on the accident, addressed to parents and stakeholders and which was shared widely on social medial platforms. 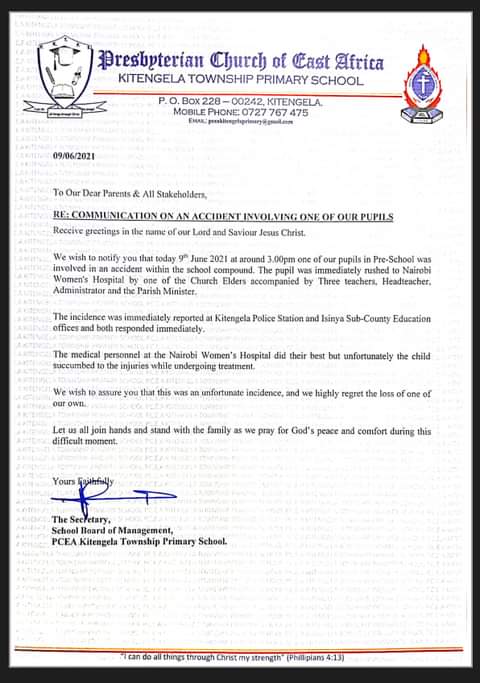 “We wish to notify you that today, at 3 pm, one of our pupils in pre-school, was involved in an accident within the school compound,” said the statement without giving details of the accident.

It added that the girl was “immediately rushed to the Nairobi Women’s Hospital by one of the church elders accompanied by three teachers, head teacher, administrator and the parish minister.”

“The incident was immediately reported at the Kitengela Police Station and Isinya Sub-County Education office and both responded immediately. The medical personnel at the Nairobi Women’s Hospital did their best but unfortunately the child succumbed to the injuries while undergoing treatment.”

Internet lights up after pictures of Sekento with president appear online