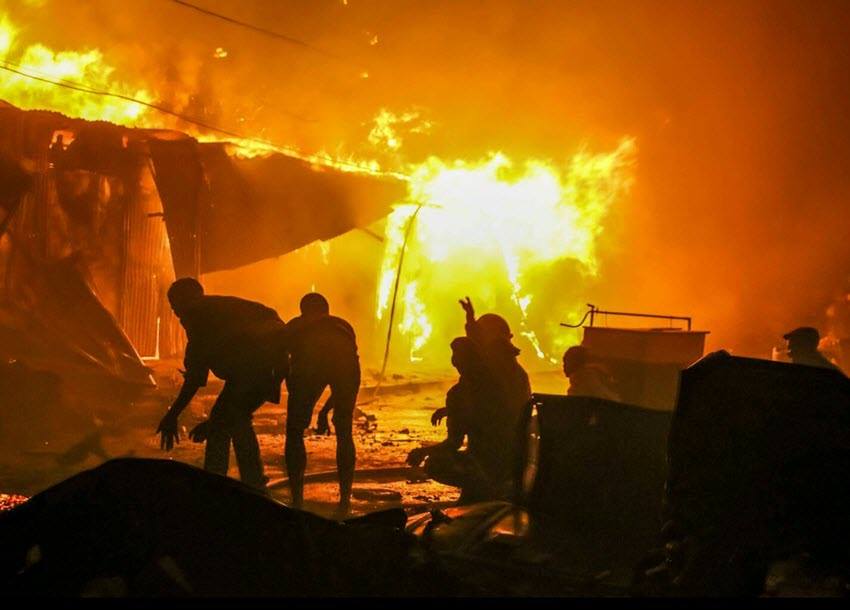 Several people have been left homeless after a fierce fire gutted down 25 semi-permanent iron sheet rental houses in Mathare slums of Ngong.

According to the victims the fire started in one of the structures on Sunday night with a suspected candle light which was left burning by a man who had fallen asleep after drinking more than a few bottles of alcohol.

Two of the victims sustained serious burns and were rushed to Kenyatta National Hospital where they are receiving treatment as per the local source.

However, the residents have faulted Kajiado County fire fighters for laxity after they arrived at the scene without water as the residents struggled on their own to put off the fire with their own resources.

Kajiado North MP Joseph Manje who visited the victims at the scene yesterday called on well-wishers to support during such a hard time.

Manje said the incident has happened at a very difficult time when the country is fighting Covid-19 pandemic and everybody is hard pressed economically during this period.

“I am calling on well-wishers to come to the aid of Mathare slums fire incident which has left many homeless and they are in need of urgent support in order for them to continue with whatever little they will get,” reiterated Manje.

He said it was time for the County Government to fast-track issuance of title deeds in order to start the process of upgrading Mathare, Gichagi, Embulbul and Kware Informal settlements that had been planned through the World Bank.

Manje said the employees working at the firefighting unit in Ngong if found guilty of laxity in their course of duty should be relieved and others who are ready to work should take their positions arguing that fire fighters must be prepared at all times.

Ngong MCA, Robert Mworia said that the County Government had collected data regarding the fire incident and the victims will be supported in order to resume their normalcy.

“It is an unfortunate incident that has led to massive property loss and the victims are in dire need of support as they struggle through Covid-19 pandemic,” said the MCA.